The Treacherous Tags Of Past 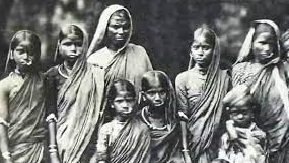 It disturbs and distresses me that there are 313 nomadic tribes and 198 denotified
tribes in present day India. Most of these 60 million people live in alienation from the
mainstream Indian society. They have no access to water, electricity and no means to sustain themselves. The only little relief they have is they are tagged now “Vimukta Jaatis” or ex-criminal tribes of India.

THE CRIMINAL TRIBE ACT OF 1871

The British came up with the Criminal Tribe Act in 1871 to brand the tribals of India as
CRIMINALS. This demonic ACT empowered the BRITISH to legally arrest, penalize and execute the natives. This act was aimed at suppressing tribal insurgency, revolt or protest against the British Imperial Forces.

THE TREACHEROUS TAGS
It is also believed, (it is the truth) that many Indian natives/tribes participated in anti-British revolt of 1857. THIS REVOLT WAS THE FIRST WAR OF INDEPENDENCE. The British were shaken up and frightened by the courage, determination of Indians. The Criminal Tribe Act of 1871 was passed to quell the free spirit of Indians and to enslave them for ever. This act classified many ordinary, normal peace loving communities engaged in earning their livelihood in a civil manner. They were craftsmen, small traders, story tellers, drama company, trapeze artists and others. It was a sheer an act of treachery that these simple people were tagged as criminal by nature and birth. They were forced to confine themselves in notified settlements and were denied the right to move around freely. To add to their misery, when these people tried to earn a respectable living, their OSTRACIZATION by the colonial masters proved to be a curse. The colonial govt. viciously made a list of criminal castes in various parts of India. They were arrested, children separated from parents and held in penal colonies or quarantined without conviction or due process of law. By 1931, the colonial govt. listed 237 criminal castes and tribes in Madras Presidency alone. Ironically, even the eunuchs were not spared; they were warned to be arrested and fined if found dancing and dressing like women.

In January 1947, Govt. of Bombay set up a Committee which included, Morarji Desai and Guljari Lal Nanda, to look into the matter of “Criminal Tribes”. This act was repealed in 1949, and millions of tribes were decriminalized.

CONTEMPORARY STIGMA AND A CHALLENGE TO SURVIVE Because of the massive public outcry, the Habitual Offenders Act 1952 was enacted in place of Criminal Tribes Act. In contemporary India, approximately sixty million people suffer the stigma of being habitual offenders. A majority of these people are living below poverty line and in sub-human conditions.